Tesla is an unconventional company that is successful even though it is a disruptor in the auto industry. 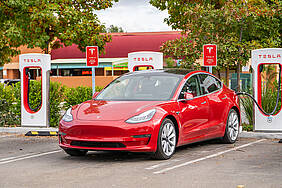 Why It’s Worthwhile to Look at Tesla Electric Car Company (May 3, 2022) Tesla is an unconventional company that is successful even though it is a disruptor in the auto industry. More importantly, it proved its resilience from all the naysayers and short-sellers, but especially during the challenges brought on by COVID19. How does Telsa do it, and why is it worthwhile to look at the company?

Most companies have a hierarchy where the way to to top is for employees to be like the president. This means the president sets the company culture – to work cooperatively or competitively, to welcome innovation or maintain the status quo, or to care about having a smaller environmental footprint, or not. Employees are hired, or stay because the company is a good fit with their own values.

Musk understands he is a role model for the company, and that he sets its cultural standard. That is why he is so visible and accessible –whether he’s on the factory floor as a hands-on engineer, talking numbers with Wall Street types, or frequently sending out tweets. Highly visible on media, he regularly communicates in short concise messages that show he is current and opinionated. Sometimes they backfire, but he personally has proven to be pretty resilient in the face of different kinds of challenges. It helps that he is a very creative person with enormous brain capacity and endless energy who seems to enjoy his work. For normal presidents, having an exceptional team would work just as well to be visible, communicative, accessible, and informed.

Good ideas should be free-standing on their own merit no matter who comes up with the idea. In practice, often this isn’t the case. People don’t want to look bad so they remain silent, or the idea is only recognized if it comes from the right person. Except for Musk. When he used to attend a meeting, he expected everyone at the table to contribute, and he questioned why they were present if they said nothing. He wanted to hear their ideas.

Brainstorming is a fun way to bring out in the open good ideas as it democratize them in a respectful environment. Ideas can then be evaluated on their merit, and then adopted. There is a greater chance of an idea being implemented and adopted successfully if people can have a say, and understand why. Successful implementation is assured when the president gives his or her approval and publicly adopts the idea. Recognizing and adopting new ideas is critical to being adaptable in a rapidly changing environment. A president doesn’t have to be Musk to do this.

Is the Company Starting Fresh or Reinventing Itself?

Since a company’s culture is led by the president, it is easier to implement a new culture with a start-up than an existing company that wants to reinvent itself. The difference between the two is that everything is new to everybody when starting fresh, whereas an established company has an established culture that is not easily shaken off. Both benefit from an outside crisis that is clear to everyone and affects everyone, like the pandemic, because then, the company’s survival is at stake.

The costs of starting fresh are much higher with a start-up than an existing company because it is often a “ do-or-die” situation. Musk was a young billionaire when he took over Tesla when it was a start-up so he could afford greater loses than most entrepreneurs, but even he had many sleepless nights. Although an existing company trying to reinvent itself often has the safety net of the tried and true, it is more likely to give up on reinventing itself when the going gets tough because that safety net is so tempting to fall back on. That is why a common challenge is an important time to implement change in an existing company.

Change is never easy, and there is a lot of resistance unless there is the leadership of the president to ensure the company is committed to that change, regardless of whether the company is a start-up or established.