Sharolyn: Before I start the interview, I have to know if you are related to Ryan Gosling, the actor. 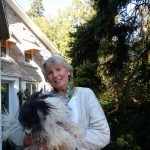 Sharolyn: Now that I got that question out of the way, let’s start. It is very impressive that through the Gosling Foundation, you led the creation of the Gosling Research Institute for Plant Preservation (GRIPP). Why is nature so important to you that you felt you had to fund your own vision of nature?

Susan: I grew up in a small northwestern Ontario town on the edge of Lake of the Woods, so I always spent a lot of time outdoors and had a strong connection to nature. My earliest memories are of playing outside, and of my Mother’s garden and the lilac hedge that grew in front of our house. Even now …. many… many years later…whenever I smell fresh cut lilac flowers I instantly go back to my childhood when every spring my Mother always had a big bouquet of fresh lilacs in a crystal vase on the dining room table and the fragrance just filled the air. I guess I would say plants have always been a part of me and in my soul. I can’t imagine a world without plants…. and how sad it would be if future generations were not to experience what I have.

GRIPP was created to help save threatened and endangered species. My husband aptly said “we can despair or we can do what we can while we can,” and that is our mission. The institute has the capability to clone a plant, cryopreserve it, and when needed, take the tissue out of liquid nitrogen and propagate the plant to how many number of plants are needed to reintroduce the plant back into the environment. GRIPP has the capacity to back up all the plants in Canada.

CPR as a model has already been demonstrated successfully with several species and this year for Canada’s 150th year anniversary, GRIPP together with Parks Canada, reintroduced Hill’s Thistle which has been designated as a species at risk. In June, there were 150 Hill’s Thistles planted in six locations around Tobermory and then monitored to check survival rates. The results were very good and the plants not only survived but thrived. A second planting was also done in July a few weeks later to confirm the results of the first planting, and again the Hill’s Thistle did well…other than those that were nibbled by deer. I think it is safe to say that plants can be successfully reintroduce into their former habitat. (Click here to read more) 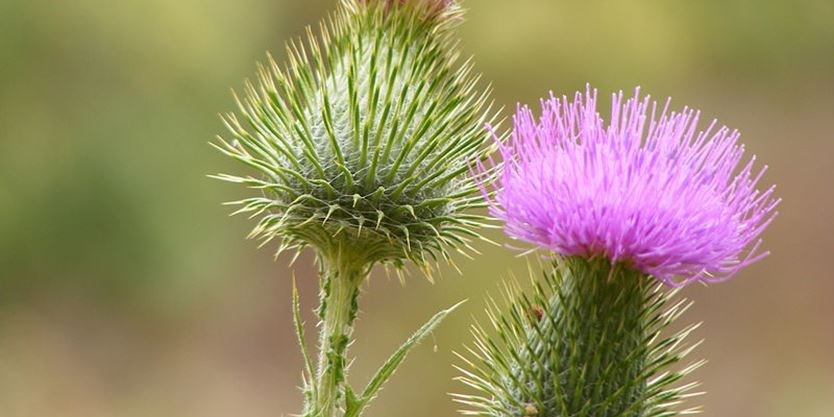 Sharolyn: Is it similar to the reintroduction of Albertan wolves to Yosemite Park?

Susan: Not quite. The climate is changing. Plants have the ability to adapt but sometimes not as quickly as needed and so they may need a little assistance before they disappear forever. Our goal is to help nature by giving it a fighting chance. What we have seen is that the plants which are reintroduced into the environment are very healthy and vigorous because they came through the process of tissue culturing using optimal growth factors and conditions and this seems to provide a reserve for the new plants to get established and do well…. a kind of head start.

We prepare the plants in the lab much like athletes are prepared for a performance. The process begins with deciding which plant needs the help and then developing a protocol to clone it…cloning is like photocopying because you can produce as many new plants as you need and each will be the same as the others.

The second part of the process involves placing the plant’s living tissue into liquid nitrogen which is at minus 196 degrees Celsius. The tissue can remain there indefinitely or until there is a need to reintroduce this plant at which time the tissue will be unfrozen and then propagated again through tissue culture procedures.

As far as we know GRIPP is the only lab in Canada that cryopreserves (freezes) growing buds. Most labs cryopreserve seed. While this is good because seed will preserve the genetics of the species, but the disadvantages are that the progeny may not be identical to the original and the germination rate of cryopreserved seed can be low. If the technology is optimized well, cryopreserved buds can be warmed up and multiplied in high numbers to reproduce as many identical plants as needed.

We call this process CPR….Conserve-Propagate -Redistribute. Parks Canada is very interested in this model because they can see how it can be applied in many situations.

Sharolyn: That sounds like an appropriate acronym, given the circumstances.

Sharolyn: With climate change underway, how do you think plants are coping?

Susan: Not well. They have mechanisms to adapt but with rapid climate change it is sometimes difficult for the plants to make changes as quickly as they need to.

Sharolyn: I heard that the last stand of elms is in New York Central park, and the only reason they avoided Dutch elm disease is because of the barrier created by all the high-rises that surround them. When I was there 2 years ago, it was hot, and I thought the trees looked sick. 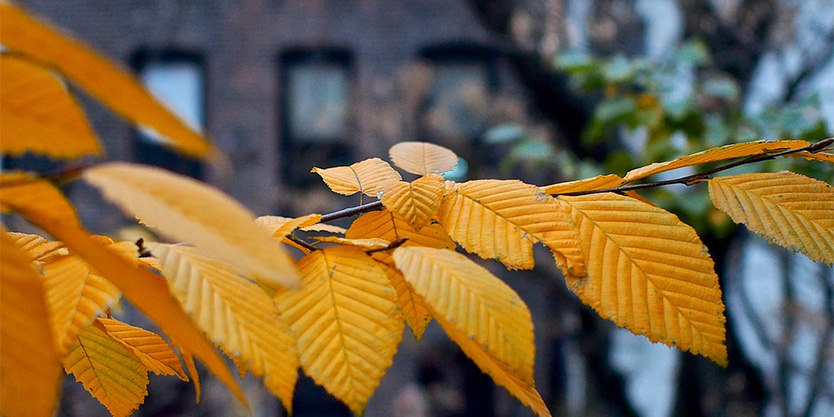 Susan: It is not only the elms that are having a having a hard time. Here, at the University of Guelph, there is a centurion elm tree that survived when the others did not. Old pictures show it was one of many trees that were there at one time. Scientists are investigating the connection between the virulence of the fungus and the fungus being able to turn off the trees’ natural defences.

Sharolyn: Any words of wisdom as to how all of us can do our part to help?

Susan: We need to put more pressure on governments to enforce, and prosecute people who violate the laws. Trees and shrubs should be protected, not cut down for a subdivision and then stick in a token tree later. Most people have no concept that you can’t replace an ecosystem with a few isolated trees. What are needed are corridors that interact with each other. An isolated tree here and there does not work. Sadly, people don’t understand how important trees are. They think existing trees are in the way of progress.

Sharolyn: What happened in your life that made you passionate about nature?

Susan: There wasn’t just one particular event. Nature has always been a part of my life. I have always observed it and enjoyed it. I have tried to impart my excitement of nature to my son who at times did not even realize how much he was learning.

My favourite story is of a female mallard duck who laid eight eggs under a juniper which grew close to my house and could be easily seen through a large picture window on the floor above. My son named her Mabel and the first thing he did when he woke up was to check on Mabel and as many times throughout the day as he could. He found Mabel fascinating and discovered many of her secrets like when she would leave her nest to feed and drink, she came and went by different routes. He even observed that she rotated her eggs with her feet and not her bill, which I would guess many birders would not have known for sure. I think he knew a lot more about nature than he realized. I think this is how it should be…an interest and a curiosity to observe and an emotional connection.

Sharolyn: How do you incorporate nature in your life?

Susan: I love that question. I connect with plants inside and outside. I always have plants growing and flowering in my house which is particularly wonderful in the winter but I love my trees and shrubs growing outside. I plant many native trees and shrubs which attract birds and every so often we see something special. It may be a bird passing through on migration and we feel privileged that this bird spotted our place and wanted to stop.

We also have a pond, in fact several ponds with a rill, and to our delight and enjoyment we have toads that like them too. Each spring we can’t wait to hear the thrill of the trill of courting toads…which is surprisingly loud and can wake you up in the middle of a sound sleep! A short time after the chorus ceases there will be ribbons and ribbons of toad eggs and then hundreds…or even thousands of toadlets which eventually grow legs and walk away. 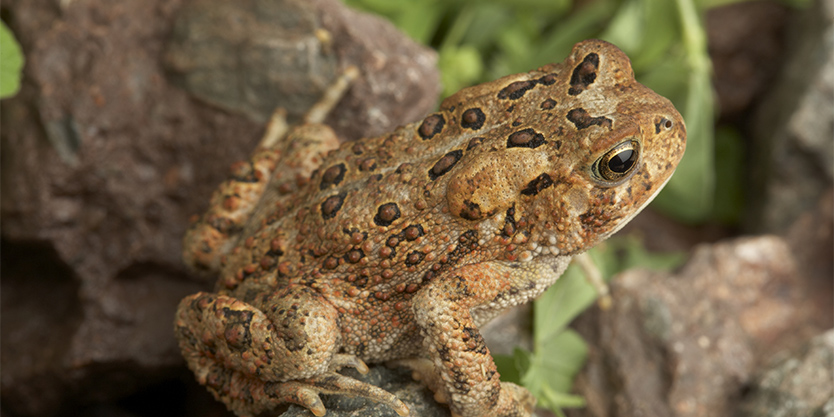 Another joy is to grow Cardinal flowers and have the hummingbirds come in to feed…every time I see those little guys I think how amazing they are.

Lastly, I have an extraordinary event occurring on my property…I have ant disturbances which I have decided…to a degree…to coexist with since they are not that close to the house but what is extraordinary and to my amazement is that I have witnessed crows, in fact several of them, land on top of the ant disturbance and literally spread-eagle on top to maximize the surface area of their body to the ground with their wings outstretched. The first time I saw this I thought the crows were injured but then after a while they got up and flew away. I saw this repeated many times and for several years. I think the crows want the ants to crawl over them and get rid of their parasites like an ant bath. How clever.

Sharolyn: That sounds like a similar relationship that the sharks have with remora fish. I did not know that!

Susan: Neither did I, until I saw it!

Sharolyn: You have a scientific appreciation of plants with your foundation, but you also recognize the spiritual contribution of plants. How do plants connect science and spirituality?

Susan: I have to think about that. It is about how plants make me feel inside. It is unspoken, and a part of my soul. When I go for a walk, I find peace. I find early mornings are particularly magical and peaceful and often when there is dew on the plants there is a certain stillness and calmness in the air. I also think plants provide for our well-being with food, medicine and shelter.

Sharolyn: Does spirituality allow scientists to see the bigger picture?

Susan: Yes. You don’t just have to see numbers to believe something is there. It is the philosophy of the lotus plant. The more our mind is open to what is out there, the more we will see even if it is on another level. It does not always have to be tangible to make an impact.

Sharolyn: What appealed to you about Women for Nature?

Susan: I was impressed with such a diverse group of women who want to make a difference. I want to ensure future generations can see and experience what I have.

I say, if man has been responsible for much, and most of the problems… let women be part of the solution! We want our children to have the beautiful world that we’ve enjoyed. We’re like-minded, and we have the will to do something. We’re like a cluster of light that forms a beam in the darkness.