Sharolyn (S): A few years ago, you successfully nurtured a Monarch butterfly from egg to adulthood. What was that like?

Laren (L): It was exciting, and I got more out of it than I expected.  I had grown up with Monarchs at the cottage, and they were quite plentiful when I was young.  I’d been seeing fewer and fewer of them so when I read an article about raising Monarchs, I decided to give it a try. I got to see firsthand all the stages of metamorphosis from egg to butterfly and it was really quite fascinating. 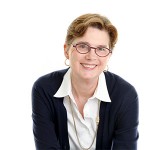 S: Were you surprised by the experience?

L: Yes.  I was surprised by how quickly caterpillars grow and much they eat.  Over the course of about two weeks, my caterpillar grew from the size of an eyelash to the size of your little finger. Caterpillars only eat milkweed and after the first few days, mine was eating about 2-3 milkweed leaves every day.

S: Wow! That means even one insect needs a large habitat. Then, one caterpillar needs a cluster of milkweed plants to provide enough food since it will eat at least 30 leaves.

L: Yes. You can see why the availability of milkweed is so important for the Monarchs.

S: Did you see your caterpillar get to the chrysalis stage?

L: Yes, she did. I had never seen a chrysalis before and I couldn’t believe how beautiful it was – emerald green with tiny golden dots. It looked like a tiny piece of jewellery. 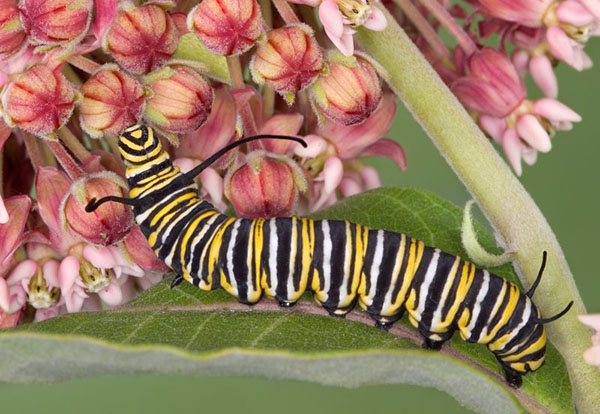 Photo of a Monarch caterpillar

S: How did you know when the butterfly would emerge? Did you see it?

L: I had read that butterflies usually emerge in the morning and that proved to be the case. I knew it was going to happen soon when the chrysalis changed from green to and orange to black and I could see the shape of the butterfly inside. Gradually the chrysalis split open and the butterfly emerged. It was amazing to watch!

S: I guess they emerge in the morning so that they have the best chance to find flowers for their first meal.

L: Yes, that would make sense. I let mine go in that afternoon in a field with plenty of wildflowers.  Because she was born in late summer I knew she would be migrating all the way to Mexico – a long journey for a small creature. It was hard to say goodbye.

S: You’ve called your Monarch ‘Charlotte’. Was that from Charlotte’s Web, the spider story?

L: No. I called her Charlotte after a dog I met in British Columbia.

S: What was the connection between a dog and a Monarch butterfly?

L: Charlotte was a small dog who got picked up by an eagle and carried away.  Her owners thought for sure she was gone, but a few days later, she returned. I wanted my Monarch to be a survivor, just like Charlotte.

S: How did you know she was a female?

L: I didn’t know for sure until she emerged. Male Monarchs have a telltale black dot on their hind wings; Charlotte didn’t.

S: How long did the whole process take?

L:  From egg to butterfly was about 5 weeks. I found plenty of good information about raising Monarchs on the internet and I should mention that if anyone is considering it, they would be wise to check first with their local wildlife authorities.  Ontario has regulations for raising wildlife, and the other provinces may have them, too.

Photo of a Monarch chrysalis

S: Was it after you released Charlotte that you decided to go to Mexico to see the Monarchs’ winter habitat at the Reserva de la Biosfera Mariposa?

L: Yes. Looking after Charlotte for 5 weeks, I developed a very strong interest in her well-being and I was curious to see where she would spend the winter. I went there this past February. I like to believe I saw some of her great-great-great-grandchildren.

S: What was that like seeing the Monarchs in Mexico?

L: It was magical – just magical! I was lucky enough to visit on a sunny day when the butterflies were quite active. At first, there were only a few, but the numbers increased as we got closer to the top of the mountain at the overwintering site. At the site itself, the trees were weighted down with huge clusters of butterflies and there were hundreds of butterflies flying everywhere. The most magical part of the experience was that if you were really quiet, you could hear the fluttering of their wings! 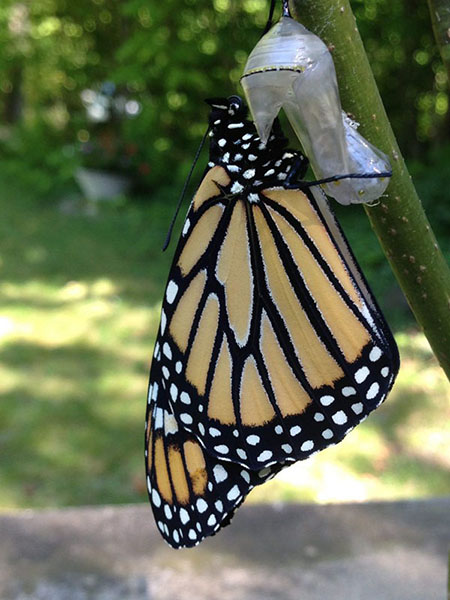 Charlotte emerging from the chrysalis. Photo from Laren Stadelman

S: It sounds like gently rustling grass. I remember that sound from when I was there. Which sanctuary did you go to?

L:  I visited the El Rosario Sanctuary.  It is high up in the mountains northwest of Mexico City, and home to one of the 14 Monarch butterfly overwintering colonies. It lies within Monarch Butterfly Biosphere Reserve, a protected area and UNESCO World Heritage site.

S:  We went to El Rosario, too. Are the farmers still cutting the trees? We saw farmers with donkeys around the sanctuary burdened with chopped wood, and small trucks hauling trunks of trees.

L: Not that I saw. I found that the people in Angangueo, the town where I stayed, seemed very aware of the Monarchs. They told me that local communities have a butterfly festival every February that celebrates the Monarchs.

S: What did you take away from the Monarch Butterfly’s migration from birth in Canada to overwinter in Mexico?

L: Getting to know Monarch butterflies has heightened my awareness of the challenges they face as a species. I now have a much greater appreciation of the milkweed plant as a food source for the caterpillars, and the need to protect the oyamel forests in the mountains where they spend the winter. In December of 2016, the Committee on the Status of Endangered Wildlife in Canada (COSEWIC) up-listed the Monarch from ‘Special Concern’ to ‘Endangered’. Hopefully this will lead to greater conservation efforts going forward. 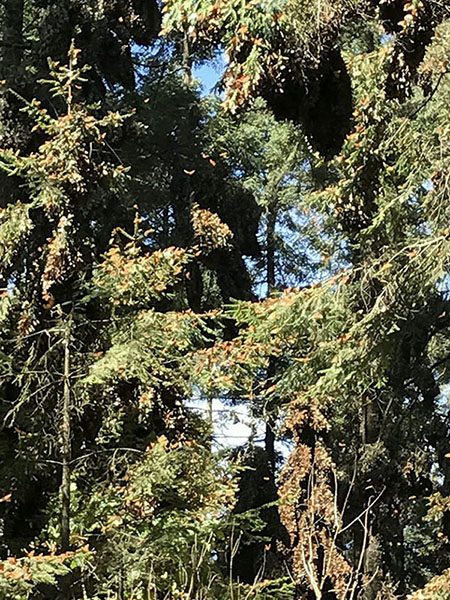 Monarch Butterflies on trees in Mexico. Photo by Laren Stadelman

S: How do you incorporate Nature in your everyday life?

S: What does being a Woman for Nature mean to you?

L: I find it a very interesting group and I am excited by the variety and potential impact of the initiatives that we have under development. I’ve been involved in two – one related to mentoring young leaders and one focused on promoting dialogue about the importance of biodiversity. It’s been a real pleasure to meet other like-minded women and I think that collectively we can accomplish a lot.