Sharolyn: I’m glad you’ve joined Women for Nature.  You are currently President of your own company, and an Adjunct Professor at York University.  You are known as the long-time former Mayor of Guelph as well as Guelph’s first female mayor.  It was you who put Guelph on the map as a “green city”.  How did that come about?

Karen: I was one of many who have worked hard over the years to make our city a “green city” and I was very fortunate to play a leadership role for many years.

In 1994, I was working for a local environmental and social justice organization and we spoke to Council about the need to address climate change, and rising greenhouse gas emissions. One of the councilors tore a strip off me and our delegation. I thought no one deserved to be treated so badly by an elected official, and decided to run for Council.

As a member of Council, I promoted policies to protect our water, land, and air. In the late 1990s, the community was increasingly concerned about the impacts of growth. So, we engaged the community in a conversation about what they valued in their community. It was great. The community got really-involved. There were bike tours, walking tours, and information sessions in the mall, and on local television. The principles that we developed broadened our understanding of sustainability to include economic and social values as well the environment. Later, we also added culture as a fourth pillar of sustainability.

One of the community’s priorities was to protect and enhance our natural heritage so we developed a strategy that would become an important part of our growth plan.

S: It is interesting you mention culture because I suspect the reason why Guelph changed its culture to embrace sustainability was because of your leadership as Mayor.

K: Leadership is important, for sure. But not just any kind of leadership. Leadership for sustainability is transformative by nature. That means leaders and those “being led” must work together to build a more sustainable world. It must be a highly democratic process that engages people from all walks of life.

S: When I was a community leader in North York, developers did not want to give land for green space.  Did they resist the City’s policy to protect Guelph’s natural heritage?

K:  Yes, they did! There were 22 objections from landowners in total. We worked through each one to find a compromise that respected the principles of our new policy. It is easy to think that all developers are the same. I would agree that some developers seem to oppose everything, but there are others who see the benefits of good policy for their own children and grandchildren.

S: Did you make the argument that there were economic, social, and environmental benefits to implement this policy so that Guelph would have a unique character as a destination rather than just being a bedroom community for Toronto?

K:  Yes. So far, we sustained that. Indeed, homes built near nature trails are more desirable. We have always found that nature trails rank higher than new hockey arenas, and swimming pools as a recreational choice.

S: And nature trails are a lot cheaper to build, and maintain! 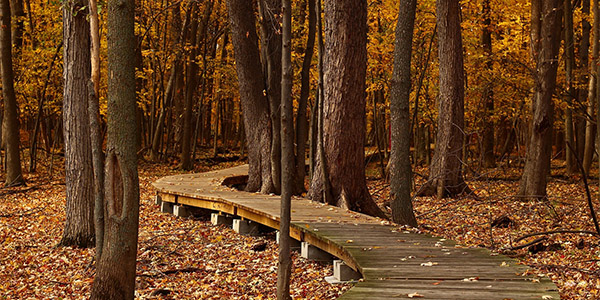 S: The City would have also saved money by extending the life of existing infrastructure, too.  Is that correct?

K: Yes, that’s right. We have also clearly demonstrated the financial benefits of sustainability. For instance, our work to conserve water has meant we don’t have to build as many new wells and reservoirs or expand our wastewater treatment plant. This has saved our residents and businesses a lot of money.

S: When people still use the argument that sustainability is too expensive, what do you say?

K:  It is absolutely, not true! In fact, practicing sustainability can be cheaper as we have shown with water conservation. Too often, we neglect to consider all the long-term environmental, economic and social costs.

S: The U.S. just elected Donald Trump who said he’d tear up the Paris Climate Accord. Do you think this will affect Canada’s commitment?

K: No, it shouldn’t make a difference although I am sure it will lead to some challenging conversations! In the U.S., most of the progress on climate change has been made at the state or local level, and that will continue. Our challenge in Canada is to get out of a polarized debate about fossil fuels and renewables and look at where and how we use energy – just like we did with water in Guelph. In Canada, 60% of energy is used in our communities and this accounts for over 50% of our national greenhouse gas emissions. There are incredible opportunities for savings in our communities.

S: Did Guelph reduce its greenhouse gas emissions with its sustainable policies?

K: Yes. We have reduced greenhouse gas emissions by composting our residential organic waste, getting more people on buses, pushing back against urban sprawl, and much more. But we can’t candy coat this, if we are serious about protecting the planet and people from climate change. There is much more work to do and that starts in our communities where we use most of our energy.

S: What inspired you to become a Woman for Nature?

K: I was certainly honoured to be asked. I was immediately impressed with the idea of 150 Women for Nature coming together to celebrate Canada’s sesquicentennial. I distinctly remember Canada’s 100th celebration, and how it was full of hope and opportunity.  Although I was young, those memories stayed with me for the rest of my life.  I wonder what memories we will create for our children from our 150th celebration.  I’m currently reading the summary of the Truth and Reconciliation Commission.  In it, the elders say that the reconciliation of Aboriginal and non-Aboriginal people must also include reconciliation with nature. This resonates with me and the goals of Women for Nature. I hope we will be successful in creating memories for our children, and grandchildren that reflect a turning point in our relationship to nature.

S: This resonates with what I think seven generations means – that we are all links in a chain where we have our children, grandchildren, and great-children in the future, and the same supporting us in the past.

S: How do you incorporate nature in your everyday life?

K: I live in the city, and regularly walk in protected natural areas nearby.  For the past 30 years, I’ve walked a special trail in the Paris Galt moraine south of Guelph, and at the beginning, I hardly met anybody.  Now, it is quite busy, and what is great is that people respect nature, while enjoying it, by staying on the trail.

S: What do you hope to contribute by being a Woman for Nature?

K: I hope to inspire other women. I know I am inspired by the other Women for Nature. Over the years, mothers have told me that I have been a role model for their children. And I have always mentored women informally, and now more formally.  Sometimes it is as simple as being seen standing in your beliefs. That is what being a Women of Nature is for me. I hope our collective voices for nature will inspire others.

S: I was a mentor to a “Top Twenty under Twenty” winner, and I would add that what you’re doing is preserving their dreams.